It all seems to have passed in a blur, but this is how it happened.

Back in 2004, I saw Stewart Lee's 90s Comedian in Cardiff. It was fantastic - so good in fact that I wanted to buy it and take it home. I had got Stew's DVD for Christmas, it was great, but of the previous year's show. So, I took a look at Stew's website, and on it he said that there would be no follow up release, as no one bought the current DVD.

That's a shame, I thought. And then I had a bath and I had this idea. I used to work at Chapter Arts Centre, and they have a nice theatre. I've a couple of friends that are cameramen, and another pal knows all about sound, and one of my cameramen friends is married to an editor.

I wrote to Stewart Lee, and told him that we could record his DVD, and to his great credit he said he would come to Cardiff for a day to give it a go. I think it surprised all of us when it came out rather well.

So we decided to offer it for sale as cheaply as we could, which involved us setting up GFS with a website based on a failed babygrow website I had recently mothballed.

From there, Stew put me in touch with Richard Herring and Simon Munnery which started the ball rolling - and it's never stopped. 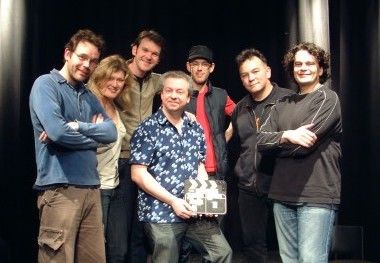 GFS Team at our first ever recording 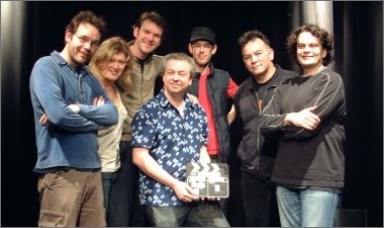